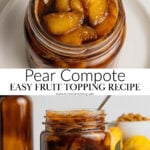 This easy pear compote recipe is a simple, fall-flavored fruit sauce that comes together in no time! 20 minutes and four ingredients are all you need for this simple dessert recipe. Serve it on buttermilk pancakes, waffles, or a slice of powdered sugar pound cake.

Pears are one of the most underrated fruits of fall. It’s all about pumpkin and apple, but I think pears deserve just as bright of a spotlight! Fresh pears pair perfectly with quintessential fall flavors like brown sugar and cinnamon in this pear compote recipe.

What is a fruit compote?

"Compote" is a French term that seems fancy but just means a fruit sauce that is made by cooking whole pieces of fruit in simple syrup.

In this recipe, we’re changing things up just a bit by using brown sugar for more depth and adding ½ teaspoon of cinnamon to bring some warm, seasonal spice, though that is not a traditional component of compote.

How to Make Pear Compote

Hard to believe something so delicious really can be that easy!

This compote is a quick and simple sauce, not a jam recipe, so it is not preserved or shelf stable as a jam recipe could be.

The compote can be stored in a container in the refrigerator for up to one week. Alternatively, it can be frozen. Here’s how:

Fill a quart-sized, freeze-safe plastic bag with pear compote. Squeeze out any excess air. Properly label and date the bag with the contents. Lay flat in the freezer until solid (you can then store the bag upright, if desired).

Compote can be frozen for up to six months. Thaw in the fridge before using.

How many pears are in 2 pounds of pears? I used about 10 small pears from our tree to equal 2 pounds before peeling and cutting. If you’re using a larger pear, such as Bartlett, it would likely be less, around 6 or 7 pears.

Use the scale provided in the grocery store to weigh the fruit when buying pears or use a kitchen scale for homegrown pears. If you don’t have a kitchen scale, I highly recommend buying one! They’re so useful!

Why 2 pounds of pears instead of 1 pound? This recipe is a bit different than my rhubarb compote recipe or mulberry compote recipe where I call for 1 pound of the fruit to 1 cup of sugar. The 2-pound measurement is to account for the loss of weight when the pears are peeled, chopped, and their cores are discarded.

What if I don’t have fresh lemons? You can use ¼ cup of bottled lemon juice. The key is to add a bit of acid via citrus juice to cut through the sweetness in the compote.

What do I serve pear compote with? I am obsessed with it on pancakes! It would also be delish spooned over vanilla yogurt! With a sprinkling of granola. Or drizzled warm over fresh waffles. Or with a slice of pound cake and a dollop of fresh whipped cream! YUM! 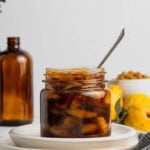