Buttery, perfectly seasoned, and absolutely melt-in-your-mouth these grilled potatoes in foil packets are the end-all be-all of grilled side dishes! The flavors of garlic, onion, and butter explode in your mouth at first bite!

I have been eating these potatoes for over half of my life. That’s how good they are! As with any potato recipe – these bad boys are versatile and customizable. Oh, and, as a bonus, you don’t have to heat up the oven to enjoy these perfectly cooked potatoes!

As I grew up and got a grill of my own, I started experimenting with the method and ingredients until I devised a recipe that is my absolute favorite! This technique makes enough potatoes to feed your whole family, produces potatoes that are so silky and buttery they practically melt-in-your mouth, and reduces the risk of burning or scorching the potatoes. Here’s what you’ll need for perfect grilled potatoes:

To serve the potatoes

After removing the potatoes from the grill I let them sit for a few minutes until the foil is cool enough to handle. Then I unwrap the foil to reveal buttery, beautiful potatoes. The scent is unreal. Just thinking about the butter, garlic, and onion is making my mouth water! Sprinkle with fresh parsley or chives. For a kick of heat sprinkle with red pepper flakes instead! 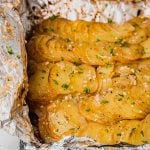