No Churn Peach Ice Cream is the summer dessert you’ve been waiting for. Creamy, fruity, cool and lightly scented with cinnamon with the delicious crunch of pie crust! Absolutely to-die-for!

It’s pretty apparent that I am on the no churn ice cream train. Heck, I think I’m conducting it! When a dessert is this easy and this delicious, it’s hard not to become obsessed!

And that’s it! Making this no church peach ice cream couldn’t be easier. There’s no custard base and no churning and freezing to worry about but this ice cream still comes out ridiculously smooth and creamy. Roasting the peaches with bourbon, brown sugar, and a dash of cinnamon creates depth of flavor and pie crust adds the crunch I’m always crazy about in ice cream.

You may be wondering a few things about this bonkers easy and ridiculously delish dish – allow me to enlighten you!

If you have any other questions about this no churn peach ice cream recipe (or life in general, what the heck?), feel free to leave them in the comments below! 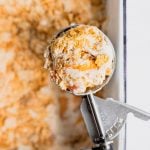 For the peach filling:

For the ice cream base:

For the ice cream: