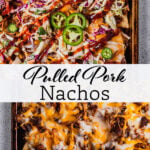 These baked BBQ pulled pork nachos are loaded with shredded pork, the best tangy cilantro lime coleslaw, two types of shredded cheese (no cheese sauce here!) and sliced jalapeños! Enjoy these loaded nachos for dinner, or as an appetizer or snack to share.

These sheet pan nachos have it all! They’re crunchy, cheesy, smoky, spicy, sweet, and tangy.

They’re the perfect cross between classic nachos and a bbq pulled pork sandwich and I gotta say – it’s a match made in heaven. They're a great appetizer idea or quick dinner during the week!

Ingredients for the best baked nachos

The amount I love pulled pork sandwiches is only matched by my love for oven baked nachos. Both of them have all the things. There’s flavor and contrast and texture.

It really seemed like a no-brainer to combine the two and make the best pulled pork nachos with coleslaw.

These loaded nachos are also super delicious made with crockpot shredded chicken!

How to make oven baked nachos

How to make nachos that aren't soggy

Tortilla chips are not infallible. They’re golden, crispy, and delicious. But! They’re also susceptible to becoming soggy when layered with all those wonderful nacho toppings.

So how can we avoid soggy nachos? The biggest trick I’ve found is to use shredded cheese instead of white cheese queso.

Shredded cheese is the secret ingredient in order to avoid the tortilla chips becoming a pile of mush. And baking the nachos helps crisp up the chips while simultaneously melting the cheese. 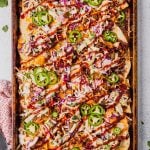