This quick cilantro lime coleslaw is tangy, bright, and such an easy recipe to make! Serve it on top of your favorite sandwiches, tacos, or as a simple side dish!

This lightly dressed coleslaw is crunchy, creamy, and cool. It takes the idea of traditional coleslaw and adds the zest of lime, pop of cilantro, and zing of hot sauce to really take things up a notch.

I used to not like coleslaw. I thought it was weird and slimy and didn’t have much of an affinity for cabbage. Then, when I realized coleslaw could be more than sad, tiny shreds of cabbage bogged down by a heavy and overpowering dressing my whole world changed. Enter – cilantro lime coleslaw!

Coleslaw is traditionally made with a dressing that is equal parts sour cream and mayonnaise with a heavy splash of vinegar thrown in. Now, there definitely needs to be something acidic in the dressing to cut down on the richness of the mayo and sour cream, but, for me, it’s not vinegar.

Vinegar is often overpowering and too strong of a flavor that ends up competing with the cabbage instead of complementing it. Enter – citrus juice! It’s the right amount of acidic without being overpowering and the flavor of lime is so delightful with the other ingredients of this recipe.

Another traditional component of deli coleslaw is sour cream. Lots of it. While I do have an affinity for sour cream, I find it to be too heavy for this recipe. Substituting full fat yogurt offers that same rich, creamy dairy component but cuts down on calories and weight. Whole Milk Greek Yogurt can also be used, if desired.

How to make this Cilantro Lime Coleslaw Recipe:

My favorite way to serve this cilantro lime coleslaw is piled high on a pulled pork sandwich. But it’s also great on top of tacos (think shrimp or fish) and nachos! It’s great when paired with ribs or bbq chicken, too!

Coleslaw does not have a long shelf life. It can be made a day in advance if you’re preparing it for a gathering or backyard barbecue, but after the first day, the colors from the purple cabbage and the carrot will start to bleed into the dressing and discolor the whole dish.

It is still edible, but not just as pretty. Store leftovers for up to three days but be sure to discard if the slaw begins to turn brown, becomes slimy, and/or smells sour. 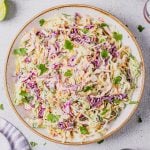