This Rhubarb Crisp with Oatmeal Topping is the perfect springtime dessert! Tart, sweet, light, and crunchy. Serve it with vanilla bean ice cream and you won’t be sorry!

This rhubarb crisp recipe is so good it converted a non-rhubarb lover (hi, hello, me!) into an effusive fan with just one spoonful! Wonderful tangy and sweet taste aside, this crisp comes together in just a few minutes and is ready to be devoured in under an hour!

This Rhubarb Crisp Recipe with Oatmeal Topping calls for both old fashioned and quick cooking oats. This is for two reasons: 1) I had both on hand so why not and 2) old fashioned oats provide that quintessential look and feel to a crisp. They’re sturdier and don’t absorb as much moisture as quick cooking oats, providing a necessary textural contrast to this crisp.

How to make Rhubarb Crisp with Oatmeal Topping

Why is my Rhubarb Crisp runny?

Many a time have I made a crisp that turned out to be anything but…well, crisp! The antidote to a runny crisp? Flour! A simple dusting of flour among the sugar and fresh rhubarb is all you need to keep the crisp crispy.

While crisp recipes are best served the day they're made, if there are leftovers I won't complain! 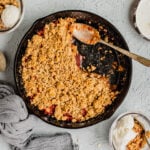 Print Recipe
No ratings yet

For the oatmeal topping:

The crisp can be stored, covered tightly with foil, in the fridge and rewarmed in a 350 degree oven for 5 - 10 minutes before serving again.