This post was originally published on September 18, 2018 and was updated on September 16, 2020. Glazed Apple Slices are the perfect dessert for fall. Cinnamon scented apples bake up beautifully in a flaky pie crust that is topped with a simple powdered sugar glaze. It’s fruit-flavored heaven!

These apple squares are the easier, more portable, servable, and sharable cousin of apple pie. With all the classic flavors and components of a pie in a simple square, they’re sure to be your new favorite!

I have been eating apple squares for my entire life. And possibly in the womb. My grandmother has made them for decades and they are a much beloved and sought after dessert in our household. My husband declared these bars so good that “if we weren’t already married these apple slices would have made me propose.” What better review is there than that?

How to make Glazed Apple Squares

This recipe is a bit time intensive, between the making, resting, and chilling of the pie crusts and then the baking and cooling time of the glazed apple slices themselves. I like to divide the process among two days to lighten the load a little bit. On the first day I will make the crusts and prepare the apples for cooking.

Of course, this means that the apples run the risk of turning brown. This happens when cut apples meet oxygen and the fruit begins to oxidize. It is perfectly safe to eat, but not very pretty. Luckily, there’s a trick to avoid brown apple slices! First, peel the apples. Then thinly slice them. Place them in a large bowl with ¼ cup fresh lemon juice and toss to coat. Cover tightly with plastic wrap and refrigerate overnight. Voila! No more brown apples!

An apple dessert is only as good as the crust it’s baked in. And boy, is this crust the absolute best! It took me awhile to get the hang of it. Walking the fine line between moisture and manipulation. But! I’ve finally got it! A perfectly flaky pastry crust that makes enough to fit into a jellyroll pan for this recipe. Here’s how to make it: 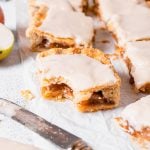 For the apple filling: