This Grilled Venison Philly Cheesesteak is a delicious venison recipe made with melt-in-your-mouth slices of venison tenderloin, caramelized onions and peppers, and creamy provolone cheese. All in one hand-held sandwich! What more could you ask for?

This post is sponsored by Oklahoma Joe’s®. Thank you for continuing to support the brands who help make Midwest Nice a place for good people to find good food.

What Cut of Venison for Philly Cheesesteak?

The traditional Philly cheesesteak sandwich is made with thinly sliced ribeye. The equivalent of a ribeye on deer is the tenderloin or backstrap. Though neither contains the delightful marbling of a beef ribeye, both steaks are going to be ridiculously tender.

For this recipe, I chose to use tenderloin because we had an abundance of them in the freezer (how lucky?!). But backstrap can be substituted, if desired.

If the idea of using a venison tenderloin or backstrap in a sandwich makes you heartsick, you can substitute thinly sliced round or sirloin roast. Although you’re really missing out because a grilled venison tenderloin sandwich is ridiculously delicious!

Personally, when making these sandwiches I’ll be sticking to tenderloin. Venison roasts do best with a low and slow cooking method, like in my red wine venison stew, and can become tough when cooked too quickly.

I made this recipe using my Oklahoma Joe’s Rider 900 DLX and Griddle. Being able to integrate the Griddle directly into the surface of the grill thanks to the Flex Grate system made it so easy to quickly grill the thinly sliced onions, peppers, and venison.

Because venison is very lean and has virtually no fat, unlike beef ribeye, it was absolutely necessary for me to add fat while the meat cooked.

I made sure to add butter and a high smoke-point oil to the griddle before adding the thinly sliced venison to make sure it came out melt-in-your-mouth tender and not dry and tough!

How to Thinly Slice Steak

We’re looking for uber thin slices of venison for these sandwiches but how do you safely and effectively get the meat thin enough to enjoy?

Thinly slice chilled venison. And preheat your Rider 900 DLX to 400 degrees, inserting the Griddle into the Flex Grate system.

Butter and toast the hoagie rolls. Then move them up to the warming rack.

Cook the onions and peppers. They take longer to cook than the steak!

Grill the venison. You’ll season it with the venison rub and Worcestershire sauce.

Combine the vegetables and steak. Then top with cheese. Turning the grill off will ensure the meat isn’t overcooked but the cheese still melts.

Enjoy! When I tell you I could eat all four of these it is not an exaggeration!

Making this recipe on the stovetop

To make this on the stove top, a la my pan seared venison tenderloin, set a large cast iron pan over medium-high heat and proceed with the recipe as follows: 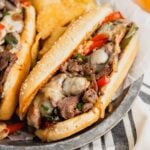