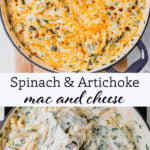 Spinach Artichoke Mac and Cheese combines two of the best dishes into one – spinach artichoke dip and the creamiest homemade mac and cheese. It’s a delightful one-pot meal full of texture and flavor!

Full of spinach, marinated artichokes, and three kinds of cheese this mac and cheese recipe is creamy, melty, and a total crowd pleaser!

Ingredients for this dish

There’s so much to love about this recipe. It’s packed full of flavor from the marinated artichoke hearts, the spices, and the cheeses.

It’s so creamy and melty thanks to a little help from an unsung kitchen hero - evaporated milk!

Plus, it’s a super satisfying and filling vegetarian dinner. Even my meat loving husband asked for second helpings!

How do you make mac and cheese from scratch?

There are thousands (if not millions) of recipes for mac and cheese from scratch out there on the internet. But it still seems like such a mystery to so many people. Here’s the best method I’ve found for easy, stovetop mac and cheese that’s creamy and cheesy.

It is produced by boiling regular whole milk until 60% of the water is evaporated off and the remaining liquid is concentrated. (This is not to be confused with sweetened condensed milk which has sugar added to it).

This means that there’s going to be less water and more fat solids in 1 cup of evaporated milk versus 1 cup of whole milk. This will prevent the sauce from seizing or separating while cooking.

And it is less caloric than heavy cream and a less expensive option that is shelf stable. Using evaporated milk leads to a velvety and rich tasting cheese sauce that’s perfect for this homemade mac and cheese recipe. 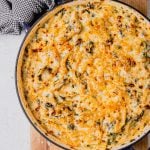 To drain spinach – place thawed spinach in a clean dish towel and ring out to release excess moisture.
There is no need to cut the artichoke hearts, as they will break apart during mixing and cooking. But, if smaller pieces are desired the hearts can be snipped with kitchen shears before being added to the dish.
Leftover mac and cheese can be stored in the refrigerator for up to five days.