This Slow Cooker Potato and Ham Soup uses leftover ham bones, fresh veggies, and lots of potatoes to create a dinner that is easy and filling! Throw everything in your crockpot before work and come home to a delicious, home cooked meal that the whole family will love!

This soup recipe is very much one of those “clean out the fridge and use what we have on hand” recipes. Leftover ham bones impart so much flavor to a simple potato soup recipe that is cooked low and slow in a crockpot. Add a splash of cream to make it even more luxurious!

For this recipe you’ll need:

How to make Slow Cooker Potato and Ham Soup

How can I thicken potato soup?

This soup is broth-based and definitely isn’t a thick soup, but it can be thickened if desired! Before stirring in the cream, microwave it for 30 seconds to warm it up. Add 3 tablespoon of flour to the cream and whisk until smooth. This is called a slurry, by the way, and it’s often used to thicken soups and sauces! Now, stir the slurry into the soup and cook for a few minutes more, until the soup is thickened. Voila! You’ve just thickened your potato soup.

Can I freeze potato soup?

I do not recommend freezing this soup for a few reasons. For one, potatoes get weird when you freeze them. They just do. Especially the ones in this soup. For two, this soup contains cream. Dairy soups should never be frozen as they can separate and curdle, totally ruining the soup. However, leftovers can be stored in the fridge for up to three days. 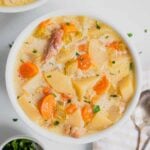