These rhubarb cheesecake squares are a fantastic springtime dessert! A velvety (and easy!) cheesecake filling that’s rich and creamy combines with a tart and bright rhubarb compote (that’s made in ten minutes!). They both sit on an oat crust that’s like a giant oatmeal cookie. What more could you want in a rhubarb dessert?

Rhubarb cheesecake bars are so satisfying and so delectable! I cannot get over the crispy crust, creamy filling, and tart compote. The combination is just out of this world! Try them and see for yourself!

What are the components of Rhubarb Cheesecake Squares?

How do you make Rhubarb Compote?

How to make the Rhubarb Cream Cheese Squares:

How to store Rhubarb Cheesecake Squares:

I love to reuse dishes as much as I hate washing them. While these bars can totally be stored in the fridge in a Tupperware container, I like to just cover mine with foil. After I lift the rhubarb cheesecake bars out of the pan (by the fancy parchment paper handles) and cut them, I’ll fit them back into the pan like a little rhubarb square jigsaw puzzle and cover the top with foil. Either way, these cream cheese and rhubarb bars will keep for the week! That is, if they last that long! 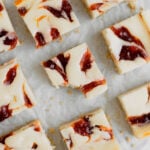 For the rhubarb compote:

For the oat crust:

For the cheesecake filling:

For the rhubarb compote:

For the oat crust:

For the cheesecake filling:

*Bars can be kept, covered, in the fridge for up to five days.