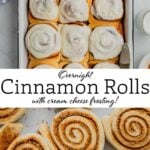 This post was originally published on February 1, 2017 and was updated on January 29, 2020. This overnight cinnamon rolls recipe is the ultimate in baked breakfast pastries. Paired with cream cheese frosting they are a true treat to enjoy any morning! Prep the dough the night before to make mornings even easier. And sweeter!

These are the fluffiest, lightest, chewiest cinnamon rolls you’ll ever have! They truly are the perfect recipe. So full of cinnamon flavor and so easy to prepare – they’ll become your new favorite in no time!

What is enriched dough?

The dough of these cinnamon rolls is what is called “enriched.” This means that the mixture includes eggs, dairy, and sugar. It makes for a chewier, sweeter dough that has more moisture. It’s a dough that is soft and workable and very forgiving. Perfect for early morning bakes!

And that’s it. The dough is made! It will be so soft and supple. Very similar to brioche. Now, the dough will need to be proofed twice before it can be baked. And there are two ways to do it. One is to refrigerate it during its first proof, the other is to refrigerate it before the second.

Letting Dough Rise in the Fridge

First Proof - This is my favorite way to do it! Make the dough all the way through Step 6 of the "for the dough" section in the recipe card. Then, place the kneaded dough into a greased container with a lid and place in the fridge overnight.

During that time (about 8 – 10 hours) it will slowly rise and double in volume. In the morning you’ll have a beautifully chilled dough that is easy to handle and work with! From there, you’ll roll it out, fill it, and shape it into cinnamon rolls. Then it’s on to the second rise and baking as directed below.

Second Proof – If desired, these rolls can be made all the way through Step 6 of the "for the rolls" section in the recipe card. Then wrap the rolls in plastic wrap and refrigerate overnight. In the morning, let them rise in a warm place for 60 minutes before baking as directed below.

Either of these options are great for refrigerating dough. And both of them make baking homemade cinnamon rolls even easier! Personally, I prefer letting them go through their first proof in the fridge. It’s just my preference. Make them both ways to find which one you prefer!

After the dough has risen and baked up to light and fluffy perfection, it’s on to the most important part of cinnamon rolls – the frosting!

Speaking of frosting! The best time to frost cinnamon rolls is when they’re still warm! About 5 – 10 minutes after they’re out of the oven, to be exact. I like to slather big dollops of cream cheese icing onto each roll. The icing runs into all the nooks and crannies of the rolls, making them even sweeter and softer. To die for!

Once the rolls are filled and roll up into that signature swirl, they need to be cut! The best way to do this? Dental floss!

I know, it sounds crazy! But it works! It leads to perfectly cut cinnamon rolls that aren’t all squished with the filling oozing out.

Run a large piece of dental floss under the rolls. Pull each side of the floss in the opposite direction through the dough to slice through it evenly. Ta da! Perfectly cut cinnamon rolls!

How to store cinnamon rolls

Leftover cinnamon rolls can be stored in the pan they’re baked in! I wrap mine in foil and leave them on the counter for a day. After that, I like to keep them in the fridge. In the refrigerator they’ll last for up four days.

Of course, a fresh cinnamon roll is always best! But, it’s easy enough to reheat a day-old pastry.

I grew up watching my mom microwave every baked good that ever graced our countertops. Cinnamon rolls in particular. And I have to say, it is a quick and easy method to reheat a cinnamon roll! For best results, cut the roll in half and microwave for 10 – 15 seconds before enjoying.

If you really want to get fancy, leave the rolls wrapped in foil and reheat in a 350-degree oven for 10 minutes before eating! 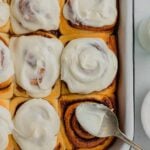