These ground venison tater tot nachos are a dinner dream come true! Made on a bed of tater tots instead of tortilla chips they’re loaded with melty cheese, perfectly seasoned ground venison, and all the fun nacho toppings you love! As a bonus, you can make them outside on the grill or inside in the oven.

This post is sponsored by Oklahoma Joe’s ®. Thank you for continuing to support the brands who help make Midwest Nice a place for good people to find good food.

These totchos (tater tot nachos) are another ground venison recipe in a long line of winners that I’m absolutely in love with! Obsessed even? They’re right up there with my venison tacos, venison meat sauce, and venison enchiladas.

I won’t claim to have invented tater tot nachos, but I might be so bold as to say I’ve perfected ground venison nachos! Because they’re not only ridiculously delicious but also incredibly easy!

While I love making this recipe on the grill, it can absolutely be made using your stovetop and oven.

It might seem a bit odd to some people to make nachos on the grill, but it’s such a fun way of making them!

Not only does it keep my kitchen cleaner and cooler, but it helps to flex a culinary muscle and help it build strength.

If you’re new to grilling, like I was (slash, still am!), I can’t recommend a gas grill enough! It’s easy to light, control the temperature, and is very user friendly.

In fact, the Longhorn Combo was the first Oklahoma Joe’s product we ever bought and it’s what started my love affair with their entire line of equipment!

The most important thing to remember is that you’re generally closer to your heat source on a grill, so while it may be tempting to really crank up the flame to reach 425 degrees quickly, you risk scorching the bottom of your tater tots!

Set the flame between medium and medium-low, letting the grill slowly come up in temperature and holding it there for perfectly golden brown and crispy tater tots!

Taco Meat – Might I suggest using some leftover venison taco meat to make a fabulous pan of these nachos.

Cheese – Be really decadent and forgo the shredded cheddar and pepper jack cheese for a thick pour of white cheese queso!

Chips – Obviously, this recipe can easily translate into being built on a bed of corn tortilla chips. That’s how my BBQ Pulled Pork Nachos get made! (Pssst…those could also be made on the grill and would be FANTASTIC!)

Toppings – Mix and match your favorite veggies from the ones I’ve listed or add more! Black beans, corn, black olives, or whatever your heart may desire. The world is your oyster and these are your nachos. 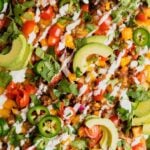