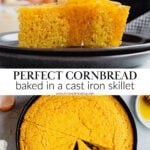 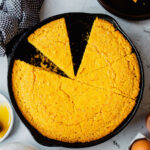 Dense and moist with just a touch sweetness, this Cast Iron Skillet Cornbread is an old-fashioned recipe that’s the best of the best! Serve it alongside your favorite BBQ pulled pork or by itself with pats of softened butter and a drizzle of honey.

This simple recipe for homemade cornbread comes together in one bowl. It gets baked in a cast iron pan to create a cornbread that has golden brown edges and a soft, tender interior. It’s easy as can be and the recipe I’ve been making for years!

A handful of ingredients is all you need to make the best homemade southern-style cornbread you ever did taste. Less is definitely more when it comes to this recipe!

Why bake in a cast iron pan?

Baking the cornbread in a cast iron pan is a very old-fashioned, traditional way of doing it. By using a cast iron pan you’re sure to get a cornbread that is tender on the inside and has that deeply golden and crunchy crust on the outside. It’s divine!

Can I use another baking dish?

If you don’t have a skillet, you can absolutely use another baking dish! It may lack the same golden brown and crunchy exterior, but it will still be delicious.

If you don’t have a cast iron pan, a 9x9 baking dish works too! Simply melt the butter in the microwave and stir into the batter before it rests. Lightly coat the baking dish with spray before pouring in the rested batter and bake as directed in the recipe.

Can I use another fat besides butter?

Feel free to substitute bacon fat, lard, or even canola oil in place of the butter if you’d prefer or if you’re out of butter. Be sure to warm up whatever fat you’re using in the skillet, though!

Out of buttermilk but craving cornbread? No worries! Make a substitute for the buttermilk by adding 1 ½ tsp. of white vinegar or fresh lemon juice to 2 cups of whole milk. Stir and let stand for five minutes before using as directed in the recipe.

Why does cornbread batter need to rest?

By letting the batter rest you’re doing two big things: 1) the cornmeal is absorbing the moisture of the egg and buttermilk. This helps it become tender!

And 2) It gives the baking powder and soda a bit of time to work. This produces a lighter and fluffier cornbread because it has had time to incorporate more air into the batter.

How thick should the batter be?

The batter of cornbread should be roughly the same consistency of pancakes. Pourable, but not runny. Sturdy, but not chunky.

It should be thick enough that it can be poured into the pan but isn’t so liquid that it wouldn’t hold its shape if poured onto a flattop griddle.

To achieve the perfect consistency in your cornbread batter start by adding 1 ½ cups of the buttermilk and mixing well. Then slowly add the remaining ½ cup a few tablespoons at a time until it appears to be the right consistency. 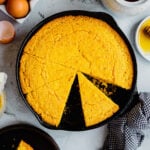 This simple recipe for homemade cornbread comes together in one bowl. It gets baked in a cast iron pan to create a cornbread that has golden brown edges and a soft, tender interior. It’s easy as can be and the recipe I’ve been making for years!
Prep Time15 mins
Cook Time25 mins
Total Time40 mins
Course: Side Dish
Cuisine: American
Keyword: cast iron skillet cornbread, cornbread recipe, skillet cornbread
Servings: 8 servings
Calories: 248kcal
Author: Amanda Gajdosik