Full of brown sugar, bourbon, cinnamon, and pecans - this King Cake Layer Cake has all the flavors of the traditional NOLA dessert!

Instead of a yeasted dough, moist cake layers studded with pecans and sprinkled with cinnamon are soaked with a bourbon syrup and topped with layer of a light and airy Brown Sugar Swiss Meringue Buttercream. Baby Jesus figurine not totally necessary, but always totally fun!

This isn’t a new recipe.

At least, not entirely! It’s just an improved version of an already incredibly popular recipe on this little ol’ site of mine.

I first published the recipe for King Cake Layer Cake back in 2017. And to my shock and delight, it truly stands the test of time. It’s a quality cake recipe!

The frosting on the other hand – needed work.

I’ve come a long way in three years. (Photographically and otherwise.) I’m realizing more and more that I’m been pretty adept at the baking/making/cooking aspect of this whole food blog adventure. Yes, of course I’m learning new things in the kitchen constantly, but if you put me in front of a recipe or task me with creating one – 9 times out of 10, I’ll be able to do it! And make it look lovely!

Capturing said loveliness though, has been trickier. I’m finally enrolled in photography classes and armed with a new DLSR. Now, that doesn’t mean all my photos are going to be perfect (Lord knows that isn’t the case!), but you may start to see more of the same tried and true and tested recipes on here getting a bit of a photographic facelift. They’re worth it.

I did make a slight alteration to the cake recipe because of the altered frosting recipe – however. For the best cake ever you should now use:

That’s it! Cake perfection awaits you. So does this new recipe for Brown Sugar Buttercream. 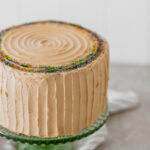 Print Recipe
No ratings yet

Recipe adapted from Dorie Greenspan's book - Baking: From My Home to Yours