There’s nothing better than a giant scoop of buttery mashed potatoes on a dinner plate. Light, fluffy, and full of flavor this is the ultimate mashed potato recipe that’s loaded with butter, milk, and perfectly cooked potatoes!

As a Midwesterner, it’s in my DNA to know a thing or two about potatoes. I’ve been eating them for my entire life. I grew up in a “meat and potatoes” home and then married into one. Potatoes are versatile, filling, and affordable. You just need to know how to harness their power.

Ingredients needed for this recipe

What potatoes are the best for mashed potatoes?

How many potato varieties do you think there are? 3? 4? A dozen? Try FOUR THOUSAND. Yes. Four zero zero zero. Unbelievable! But! In my extensive potato eating experience there are a few potatoes that are better for mashing that others.

In this recipe I use unpeeled Yukon Gold potatoes for their delicate texture, thin skin, and lightly sweet, buttery flavor. Leaving the skin on imparts a massive dose of vitamins and minerals into the finished dish and makes prep much easier.

I also love making mashed potatoes with Baby Red Potatoes for the same reasons. A Russet Potato is the most traditional and widely available potato and can be used in substitution, but they will need to be peeled before boiling unlike the Golds or the Reds.

How to make Buttery Mashed Potatoes 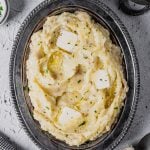