Are you searching for the best cream cheese frosting recipe? One that’s light and fluffy and tangy? One that’s perfect for cakes, cookies, and cupcakes? Look no further than this family favorite!

This frosting recipe has been used in our family for decades. It’s easy to make, has an amazing flavor, and a texture that just cannot be beat! It’s one of those back-pocket recipes that can be pulled out for any occasion to impress people.

I can’t take credit for this recipe, though. All that I know about cream cheese frosting I learned from my mother. It’s one of the three things she can make better than anyone else I know. (The other two being tuna salad and lasagna.) Every birthday cake, every Christmas cookie, every cinnamon roll in my childhood was slathered in this beautiful, fluffy magic. And I’m a better woman for it.

How to make Cream Cheese Frosting

How to fix runny, thin frosting

Recipes for frosting are SO forgivable! If something goes wrong and your frosting recipes comes out a little runny (this can happen if the butter is too soft, almost melted or if too much milk is added) it can easily be fixed! Just add more powdered sugar, ¼ cup at a time, until the desired consistency is reached. Mix for 30 – 60 seconds after each addition of powdered sugar.

Can you freeze frosting?

Yes! I have had great success both refrigerating and freezing this recipe! It will last in the fridge for two weeks and in the freezer for up to three months. When it is frozen, remove it from the freezer to the fridge to thaw overnight before using. To reconstitute refrigerated cream cheese frosting bring it up to room temperature, put it in the bowl of a stand mixer and whip with a paddle attachment until fluffy. If the frosting feels runny, add another ¼ cup of powdered sugar to help thicken it.

What to put Cream Cheese Frosting on: 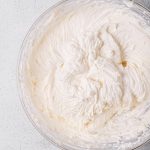