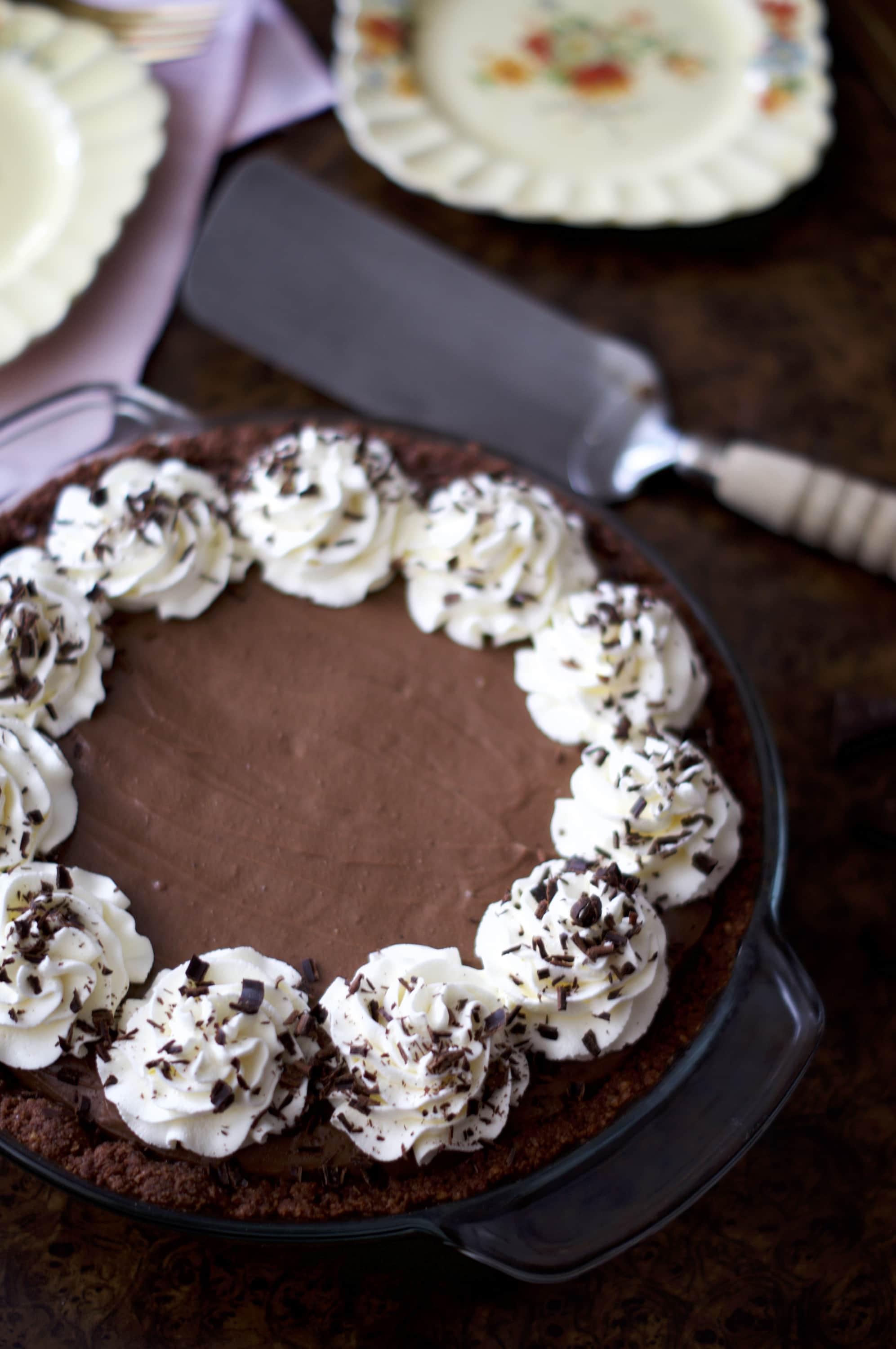 Heartbreak is different for everyone. Different for the same person. Changing and shifting and morphing. At least, that’s how it’s been for me.

It has been painful, of course. Annoying, aggravating, cursed, unrelenting and seemingly unending. Those too. It has ebbed and flowed, ceasing altogether some days only to rear its ugly head the very next, with a force that quite literally took my breath away. It has been fleeting, flickering into my consciousness unexpectedly only to be whisked away in a moment. It has tugged gently at the edges of my memories, in those early morning minutes between sleeping and waking, when the dreams still feel real, before reality has set in and my mind and heart are still weightless, grief not weighing them down.

It has been necessary. Necessary to avoid “his side” of town. Necessary to avert my eyes when I think I spy his truck on the road. Necessary to sit in a hot, dark shower, water hitting my skin until it’s red and raw, the sounds of this song reverberating on the bathroom walls. Necessary to feel the ache in my chest, the hurt in my lungs, the catch in the back of my throat from another bout of sobs racking my entire body. 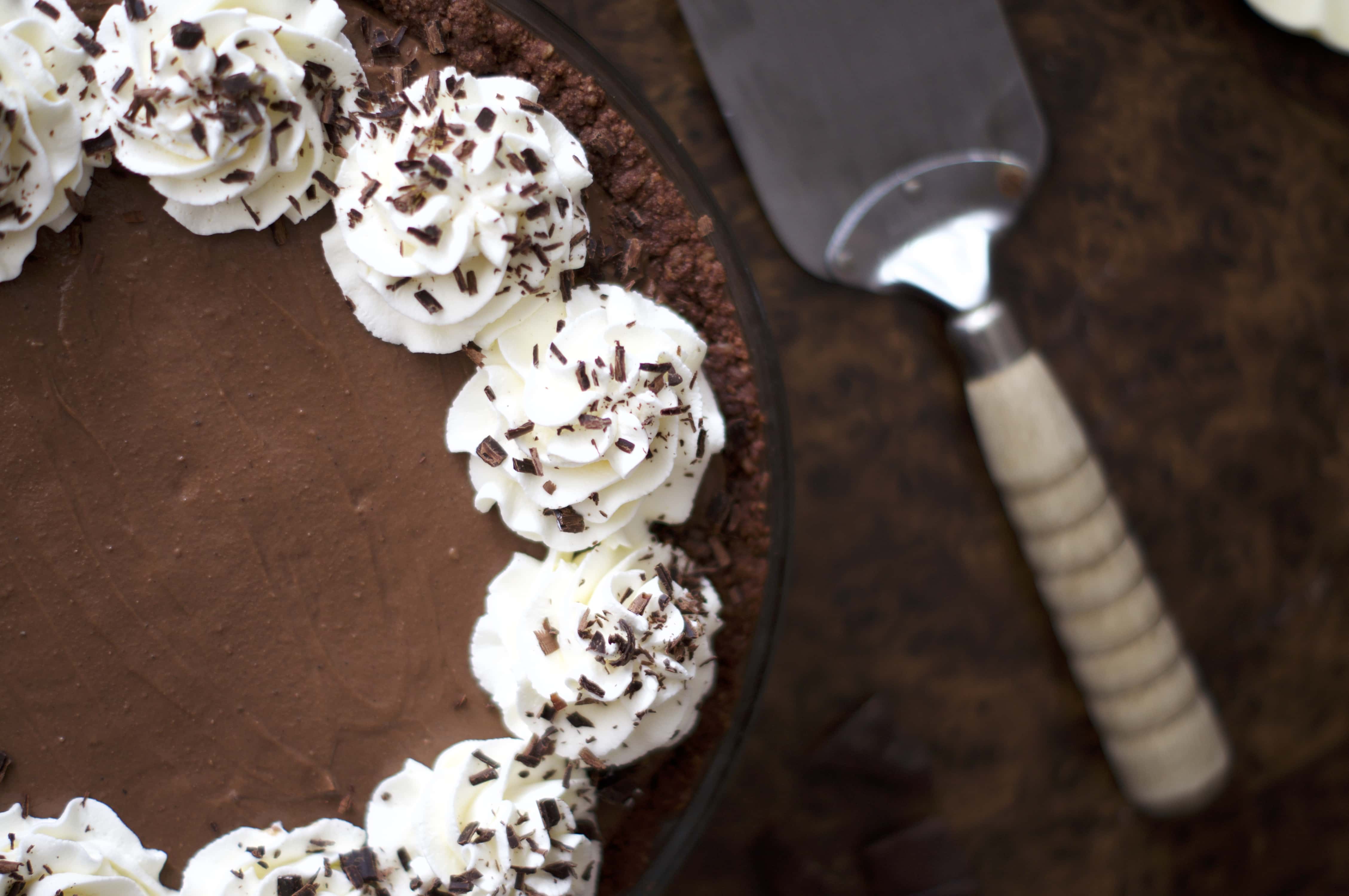 It has been strong.

I know I am stronger.

There was a time I didn’t know that, though. A time when all I could be was left. Alone. Again. I know I am not the first person to be broken up with, to be broken hearted, and I know I won’t be the last. I know there are worse things that can happen to a person, that other people have a harder time, but I’ll be damned if that means my experience and emotions hurt any less. Are worth any less.

My friend Kristen, in all her unending wisdom, equated it to a death. And as melodramatic as that sounds, as all of this has sounded thus far, something did die. A relationship is a living and breathing thing, and when it ends it leaves a void, a chasm. It dies. There were hopes and dreams and plans that ceased to exist. And for a while, I thought a part of me had gone along with them. 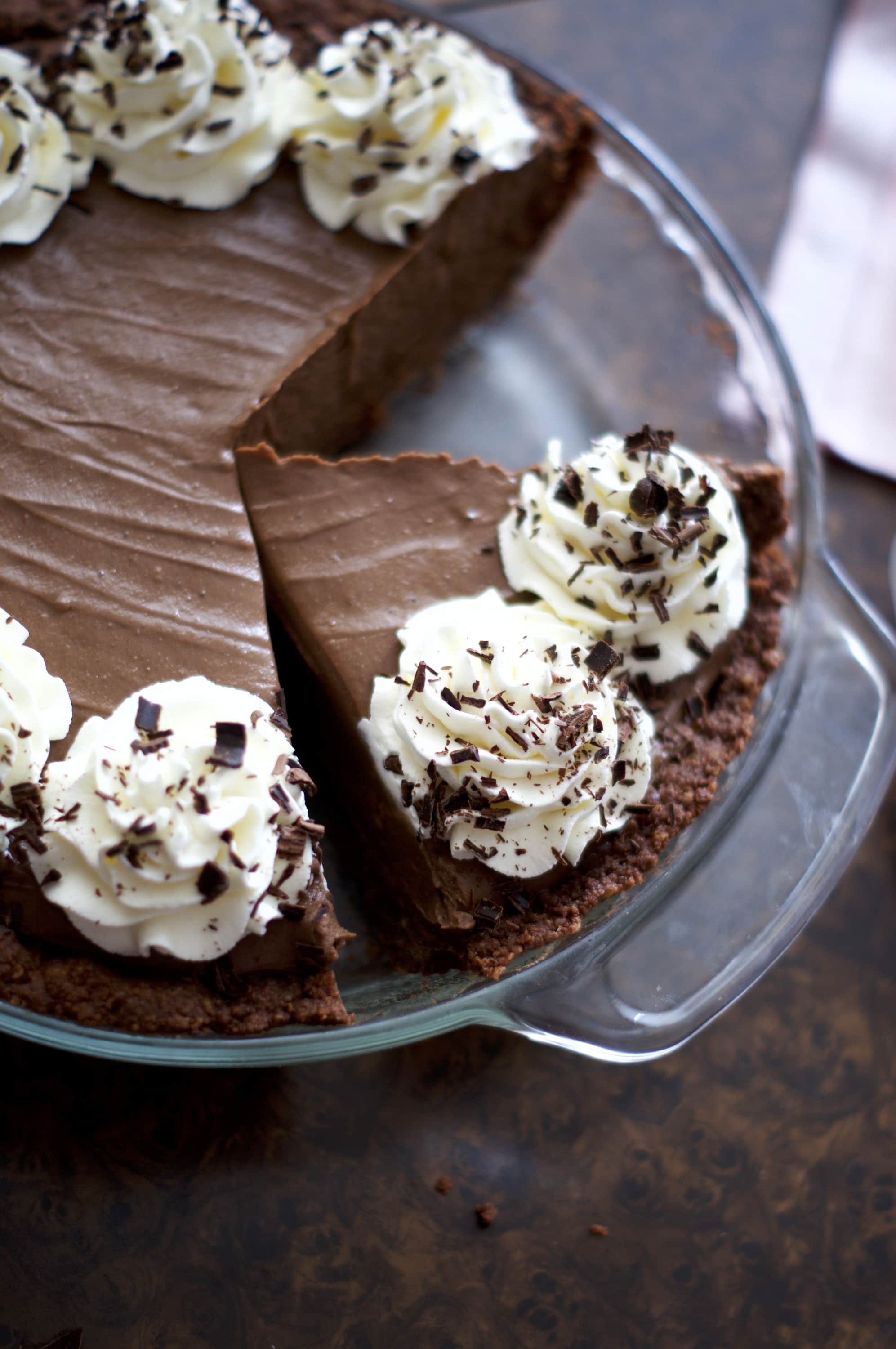 In truth, that’s the main reason for my silence these long, winding weeks (going on months). Sure, it was partially the new job, the juggling of a new schedule and new responsibilities, a desire to perform well and make connections with my new coworkers, impress the new boss. But, mostly, it has been heartache. Restarting my life without the person I was planning it around. Leaning into sadness and loneliness, leaning onto the pillars my family and friends have provided.

But I’ve gotten used to it. Or, at least, I’m getting used to it. That’s what we as humans do. We adjust, we carry on. Even as much as we fight and fear change, homeostasis is a biological inevitability. I have made new routines, started new traditions. I have grown comfortable falling asleep alone and waking up that way, too. I have begun filling my life, and my heart, back up. I have chosen to make changes after one was forced upon me.

That includes changes around here, too. To be more honest, more intentional, for better or for worse. I still firmly intend to share food and drink, but with less fluff, more substance. I don’t want to put up a post just for the sake of it. I want meaning. I want emotion. I want to be myself. Because, according to Kristen, who once again surprised me with a nugget of necessary wisdom, “that’s all I should ever be.”

And I am emotional. I know no other way. I have been called an open book many times – sometimes in admiration, sometimes in antipathy. My friend Danielle has expressed equal amounts of both after seeing the big, beating heart on my sleeve. She’ll probably think this post is too much info, would never do such a thing herself, but won’t ever hold it against me. Because she knows me. She loves me. So does Kristen. So does my dad. My mom. My grandma, sisters, aunts. Robin and Bunny, too. Shawn and Dawn, without a doubt. They prove there is still so much love in my life, even if I haven’t found the love of my life. Everyone who has rallied around me has shown me that, gifted me that. And I am eternally grateful. 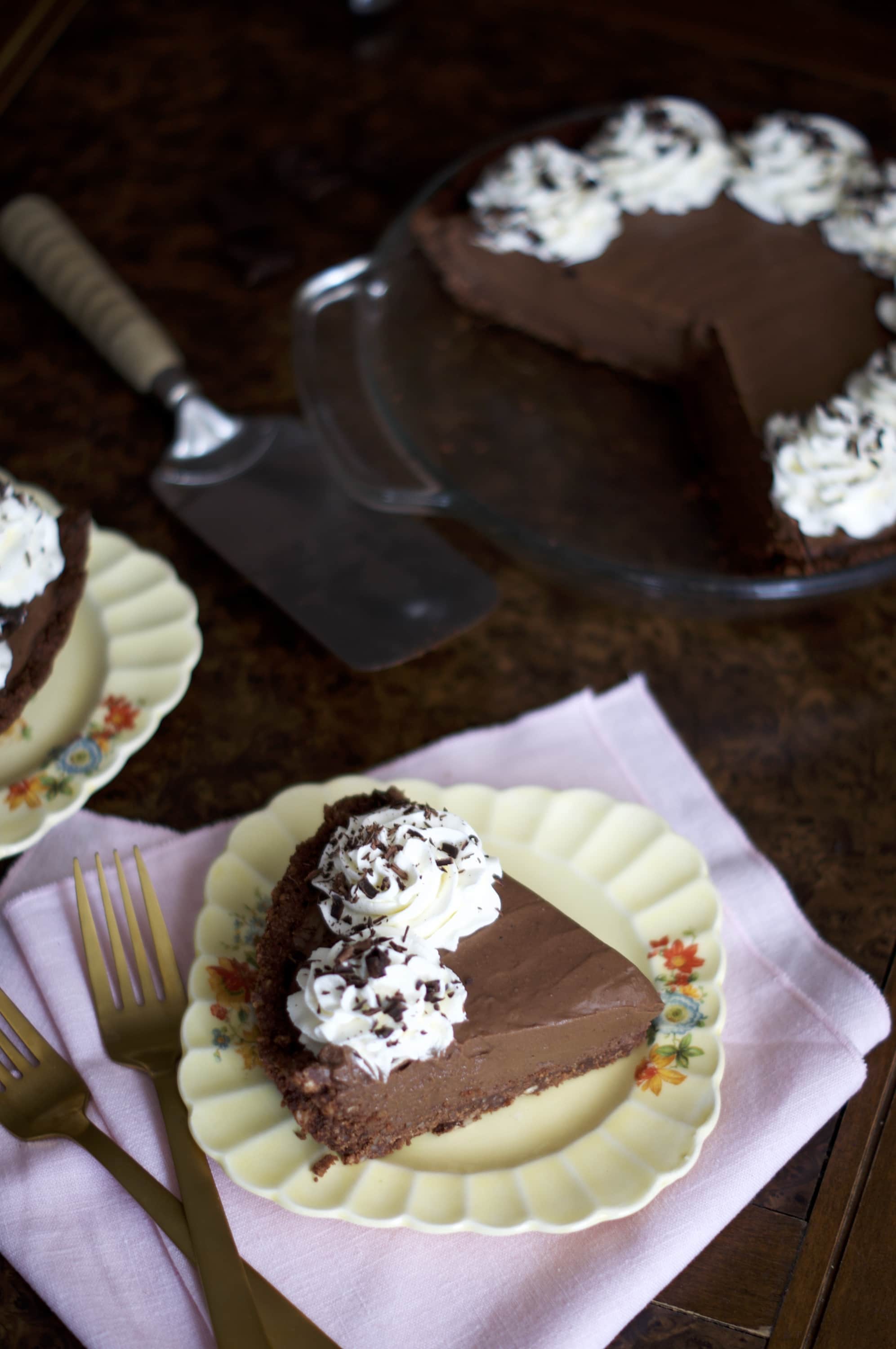 In some small attempt to repay them for their love and kindness, their shoulders and strength, I have made treats. Efforts at returning the love so freely given to me. Cakes, cookies, pies. I know it is a small gesture, not necessarily life altering or affirming for them, that they don’t get the same buoying from a batch of biscuits that I get from a phone call back home. That their hearts aren’t as heavy, don’t need as much lifting.

That’s what this pie was. It was made for Kristen on her birthday, months ago. She mentioned Mississippi Mud Pie in passing, while we brainstormed ideas for my Pi(e) Day post. And then mentioned it again. And again. All in the same night. It was pretty obvious that no other treat would do for her. She loved it. And I hope you do too. We could all use a little more love. And pie. 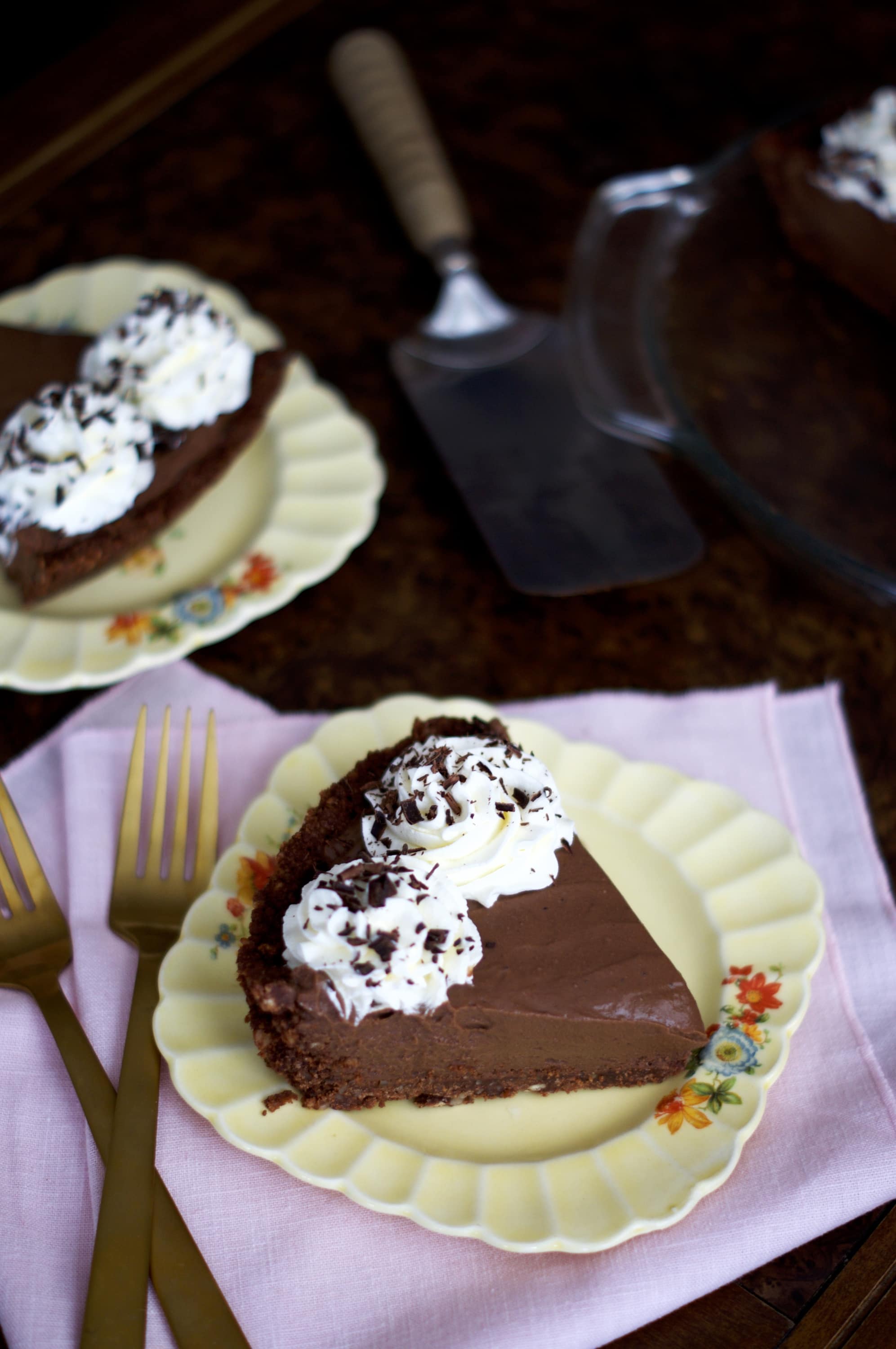 While the oven preheats, combine all ingredients for crust, besides the butter, in a food processor. Pulse until combined. Slowly stream in butter until a sandy, coarse mixture comes together.

Press crust into a 9-inch pie plate and bake in preheated oven for 7 – 10 minutes, or until no longer “wet” looking. Remove from oven and allow to cool on wire rack.

While the crust bakes, combine the evaporated milk, half&half and chocolate in a medium saucepot and cook over medium heat until chocolate has melted.

In a separate bowl, whisk together the sugar, egg yolks, and cornstarch until light and thick. Slowly temper into the chocolate mixture and continue cooking until thick enough to maintain its shape when scooped with a spoon or swiped with a spatula, about 7 minutes. Whisk in butter, vanilla extract, and booze.

Pour into a large bowl (the same one you used to make the sugar mixture would work just fine) and cover with plastic wrap. Place in fridge to cool for 30 minutes.

Before serving, in the bowl of a stand mixer fitted with the whisk attachment, combine the topping ingredients and whisk on medium-high until stiff peaks form. Dollop onto pie and sprinkle with chocolate shavings, if desired.

Pie can be stored in fridge for up to three days. 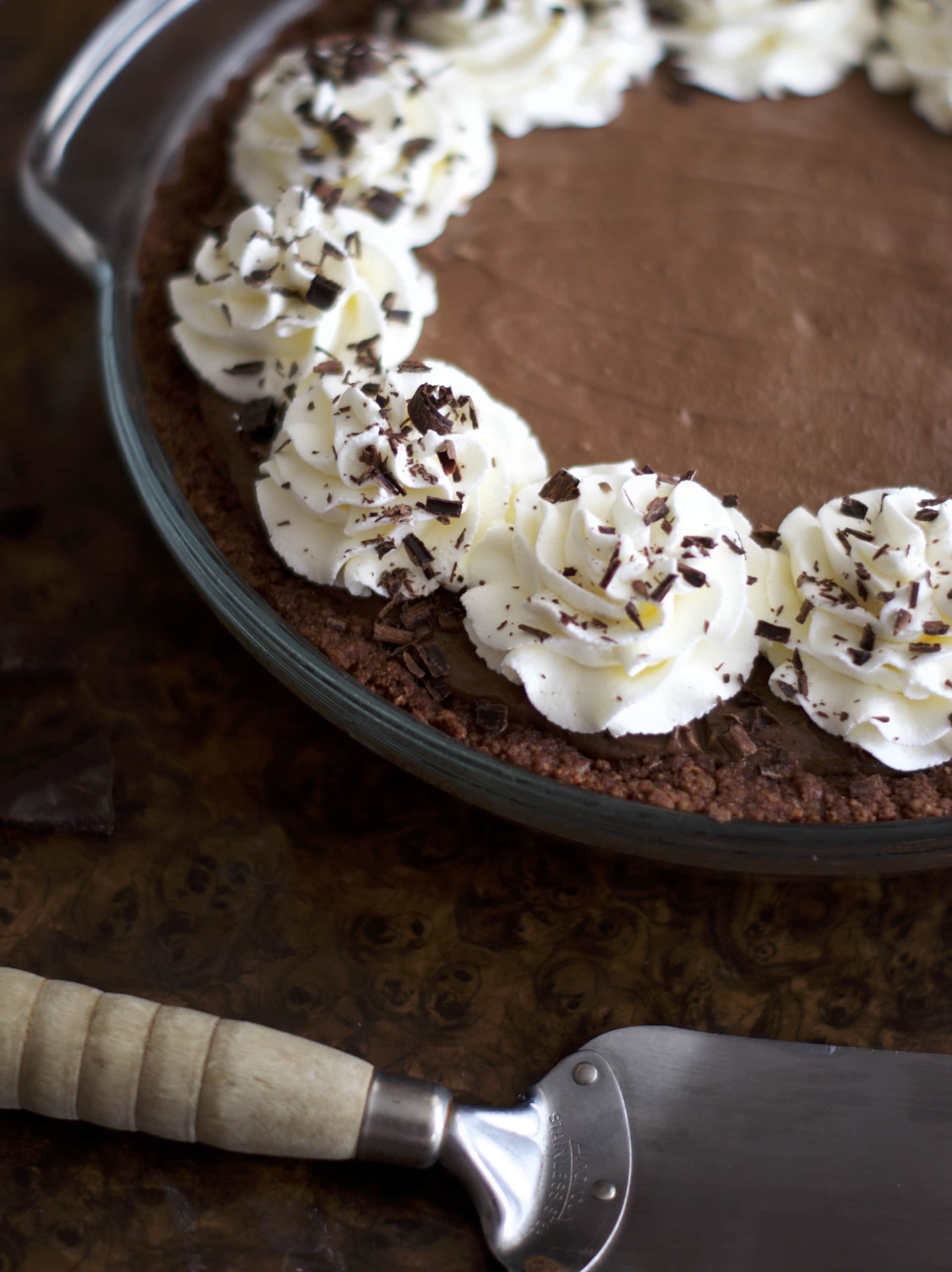