I’m writing this from the airport. It only took me 10 minutes to check my bag and get through security. Guess I’ve got some good travel karma going on. Holla! Even if it had taken longer, I wouldn’t have minded. I’m at the airport irrationally early. I just couldn’t wait anymore – I’m ready to be home!!! 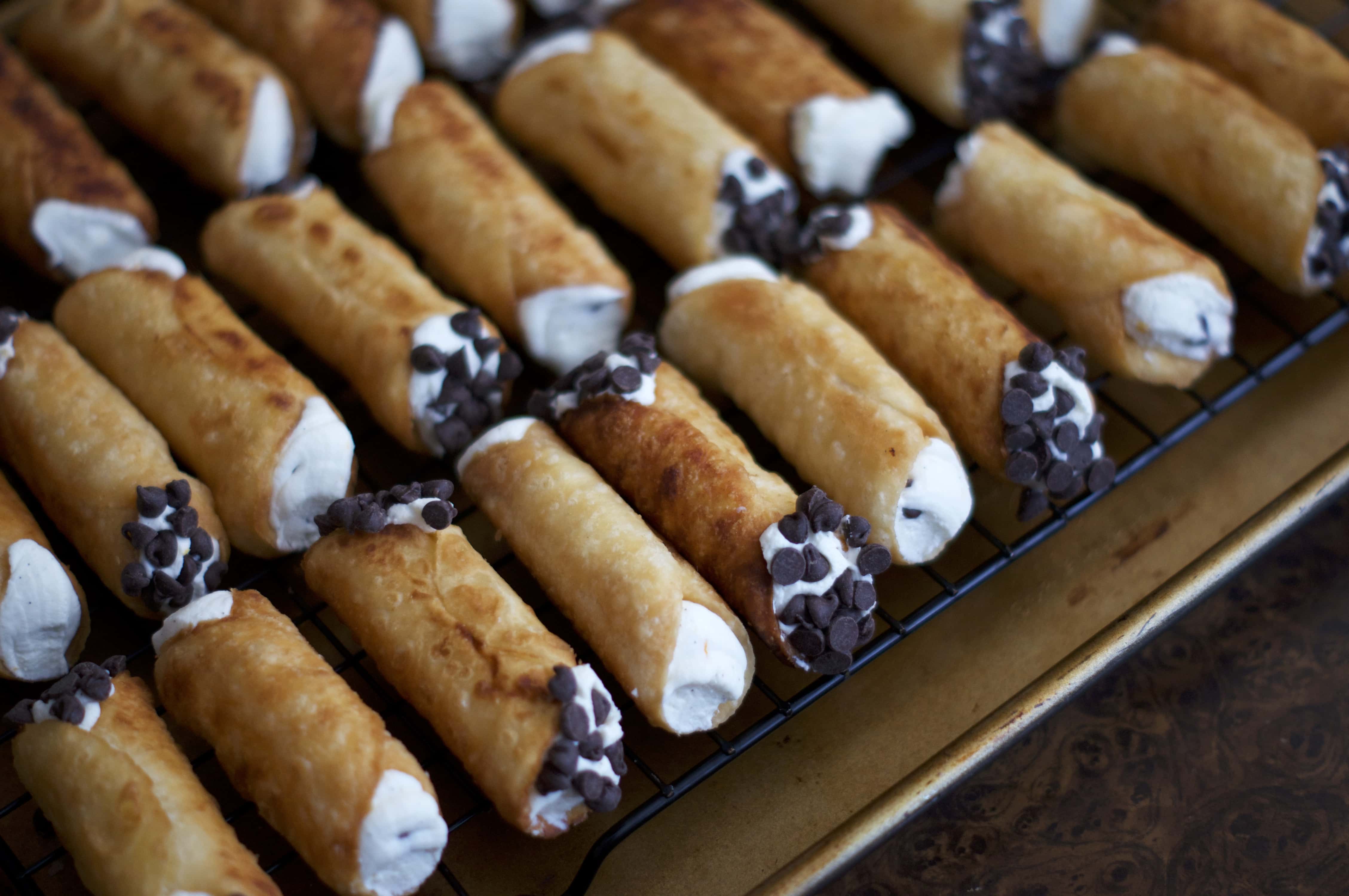 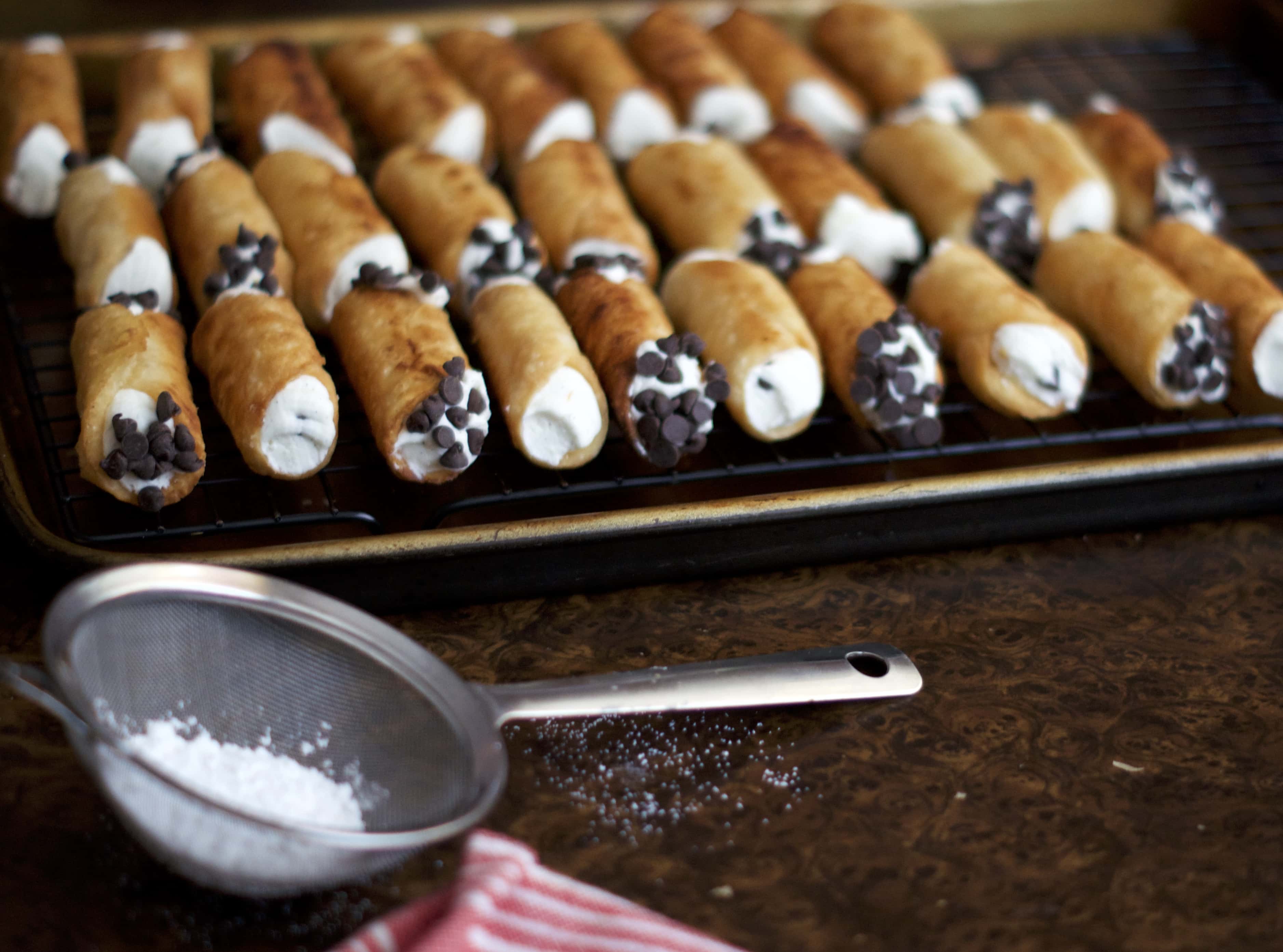 Home, where there’s family and friends and snow, yadda, yadda…

Sure, I’m excited about that, obviously. I’m not dead inside. But, can I tell you what I’m really excited about? 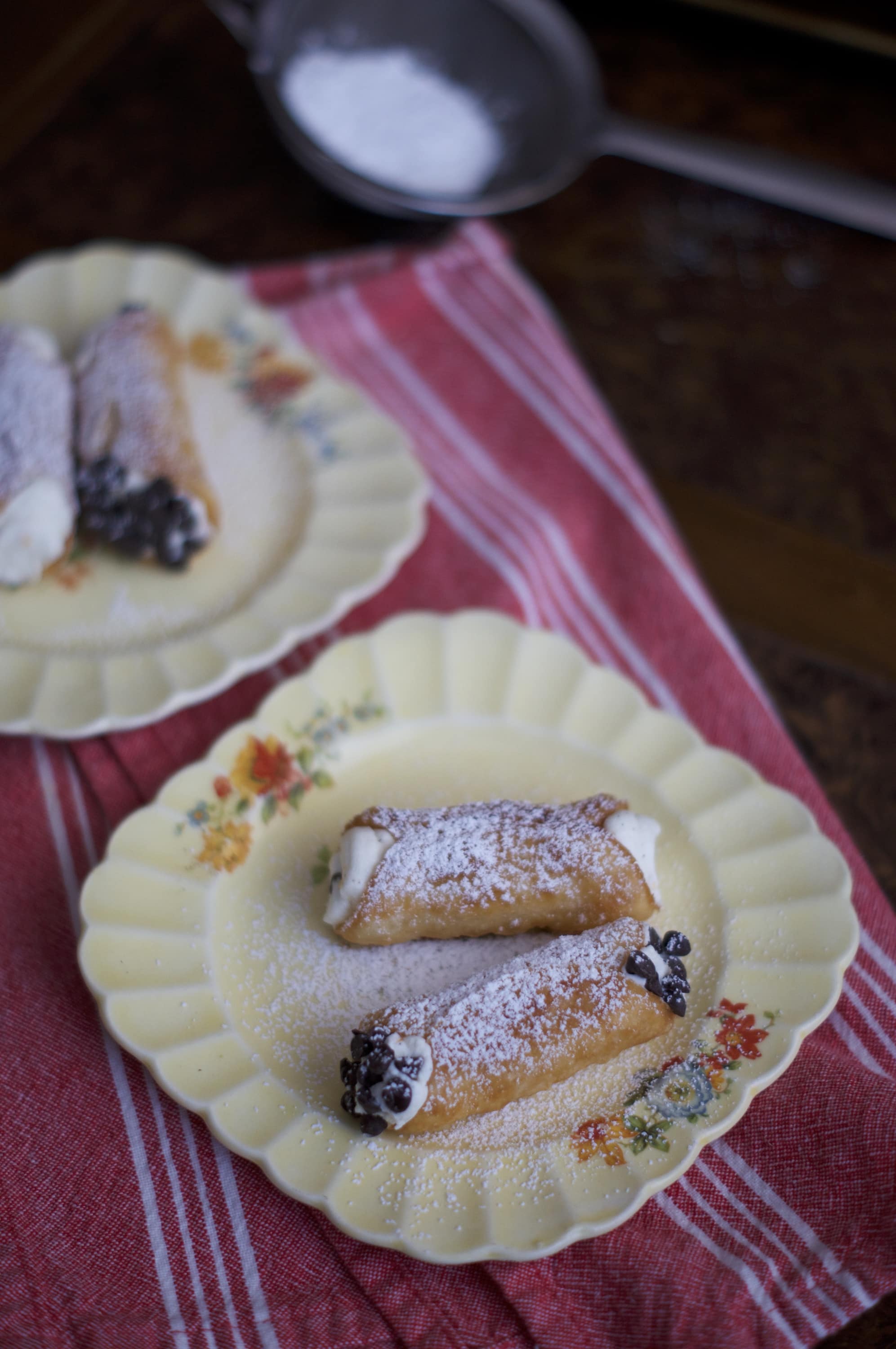 Are we surprised at all?

My sister-in-law shared her recipe and technique with me when she came to visit a few months ago. Since then, I’ve decided to make them a thing in the South. And you should too. The process is involved, and requires cannoli molds and frying in hot oil, but the result is oh-so worth it. Crisp shells around creamy filling with just enough punch from orange zest and allspice all covered in a light dusting of powdered sugar. Sigh. 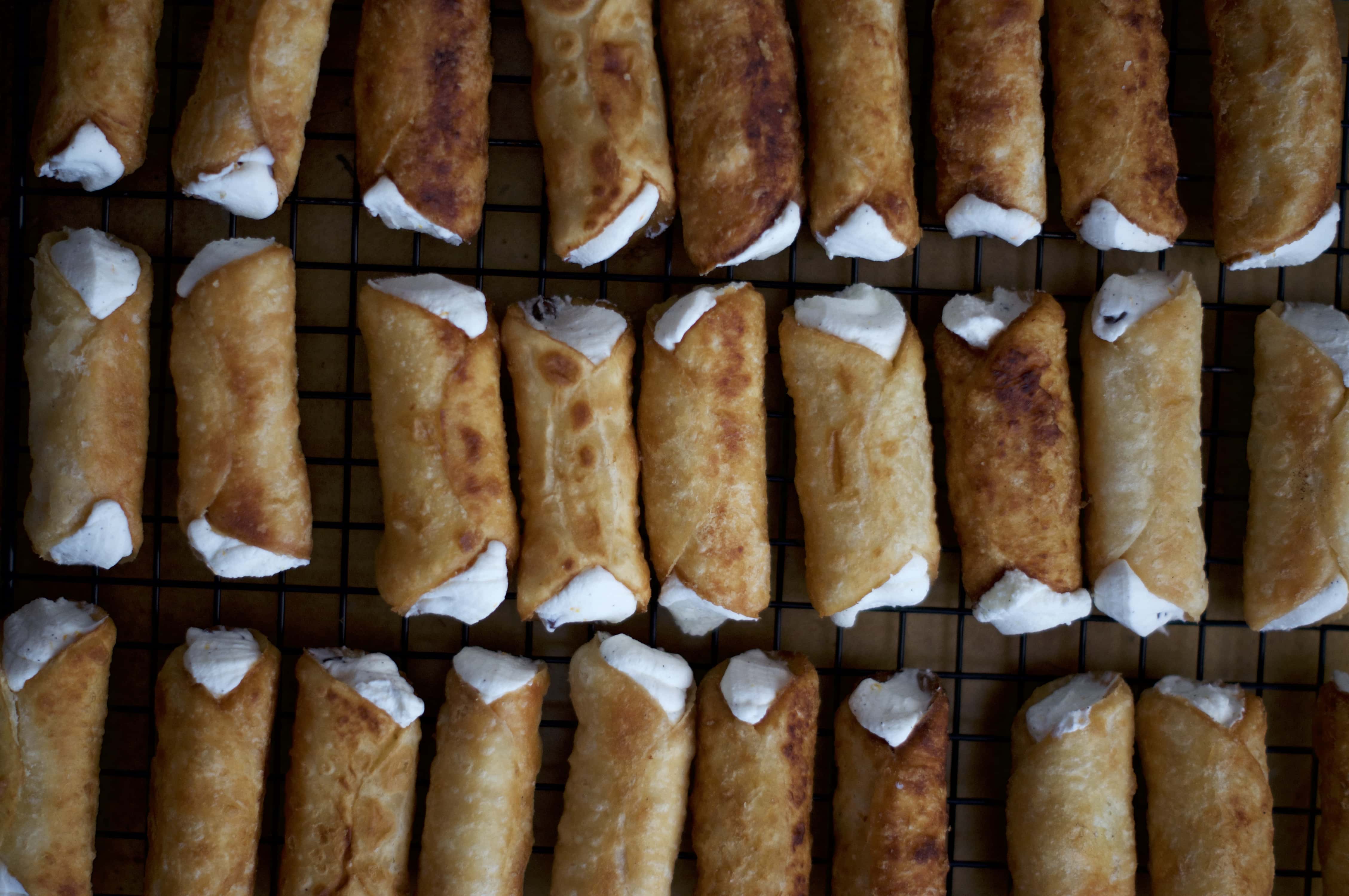 Wherever you are, North or South, give these a try.

(makes about 50 mini cannoli, adapted from this recipe)

Zest of one orange

For the shells: Whisk together the flour, sugar, and salt. Cut in butter until no pieces larger than a pea remain. Using a fork, stir in egg yolk and ¼ cup of wine. Continue adding wine until dough comes together in a ball. Wrap in plastic and allow to rest while you’re making the filling.

For the filling: In the bowl of an electric mixer, whip the heavy cream until stiff peaks form, set aside.

Stir together the ricotta, mascarpone, powdered sugar, and vanilla extract until smooth. Stir in the zest, allspice, salt, and chocolate chips. Slowly and carefully fold in the whipped cream, being careful not to overbeat as the cream may fall. Refrigerate until ready to use.

Rolling and frying: In a large cast iron skillet, heat up 1 inch of oil until little bubble appear along the edges of the pan or when a sprinkling of flour sizzles across the top of the oil.

While the oil is heating, divide the dough in half. On a floured surface, roll the first half of the dough out to a little less than 1/8 of an inch. You’ll want the dough very thin to fry evenly and quickly. Using a cookie cutter or large glass, cut round of dough large enough to fit around the cannoli molds.

Roll molds in flour, tapping off excess. Wrap dough around the molds and secure with a little egg wash brushed along the seam, pressing gently.

Fry in hot oil for 1 – 2 minutes, or until shells are golden. Using tongs, rotate the molds at least once to ensure even browning. Remove to a rack place over a paper towel lined cookie sheet. Allow to cool for a few minute or until the molds are cool enough to touch. Gently remove shells and repeat process with remaining dough.

Once all the shells are fried and cooled, transfer filling to a large piping bag or a large plastic bag with the corner snipped off. Pipe filling into cooled shells.

Dip each end into additional chocolate chips or dust with powdered sugar if desire. Serve immediately.

*Shells can be made ahead of time and frozen in an airtight container until ready to use. Pipe filling into frozen shells and leave out until the cannoli reach room temperature before serving. 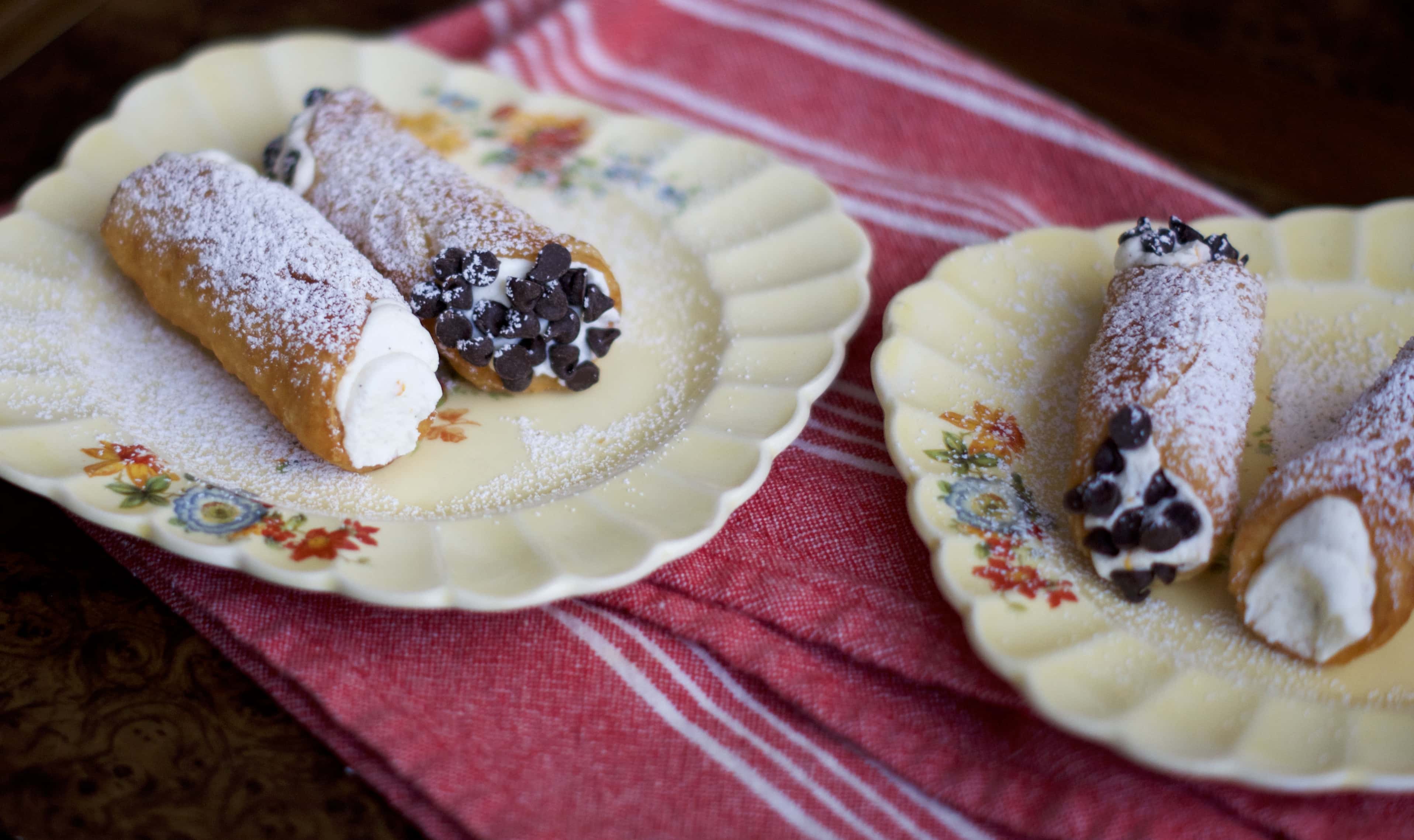 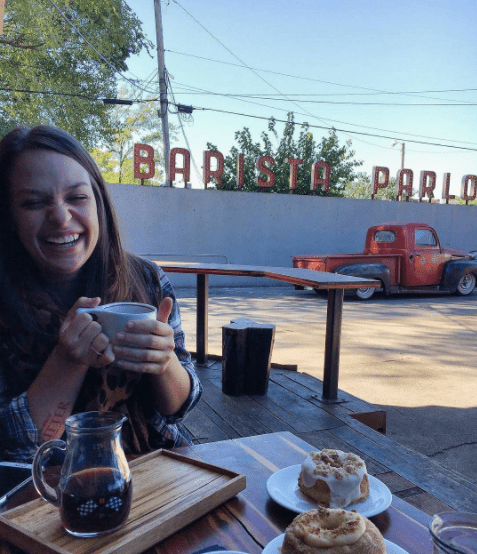