I accidentally made you a trifle. Because I was purposely trying to make you a cake. 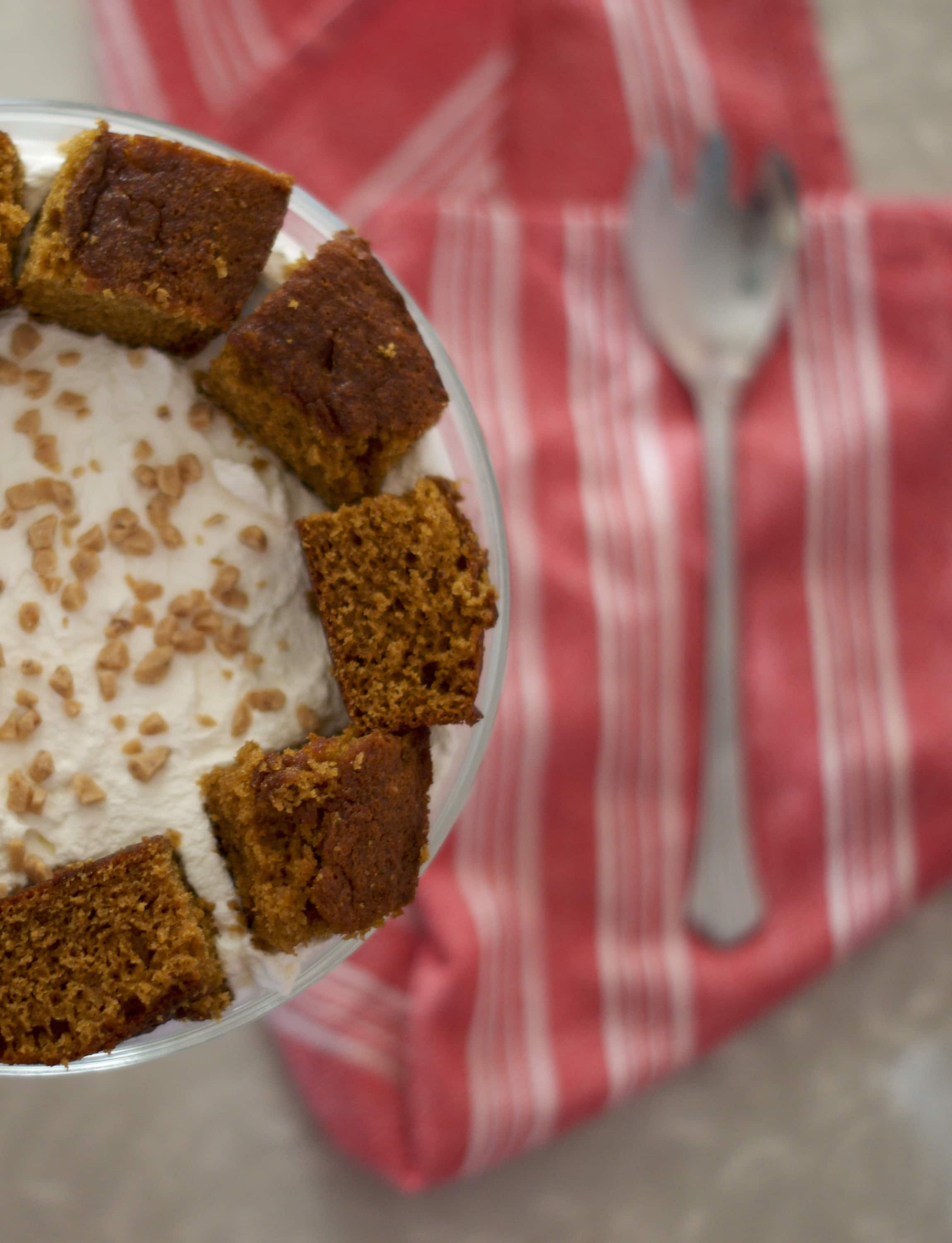 I’ve always been a fan of kitchen gadgets that are useful and serve a multitude of functions. If it’s going to live in my cupboards, it better be useful in more than one way. There are, however, exceptions to this rule. There always are.

A cookie press. A lamb cake mold. A trifle dish. Not things I use on a daily basis, but they’ll stay in my cupboards. Because when I need them, I neeeeeeed them.

And I needed my trifle dish when I flubbed this cake. And you need a trifle dish because you just plain ol’ need this trifle in your life! 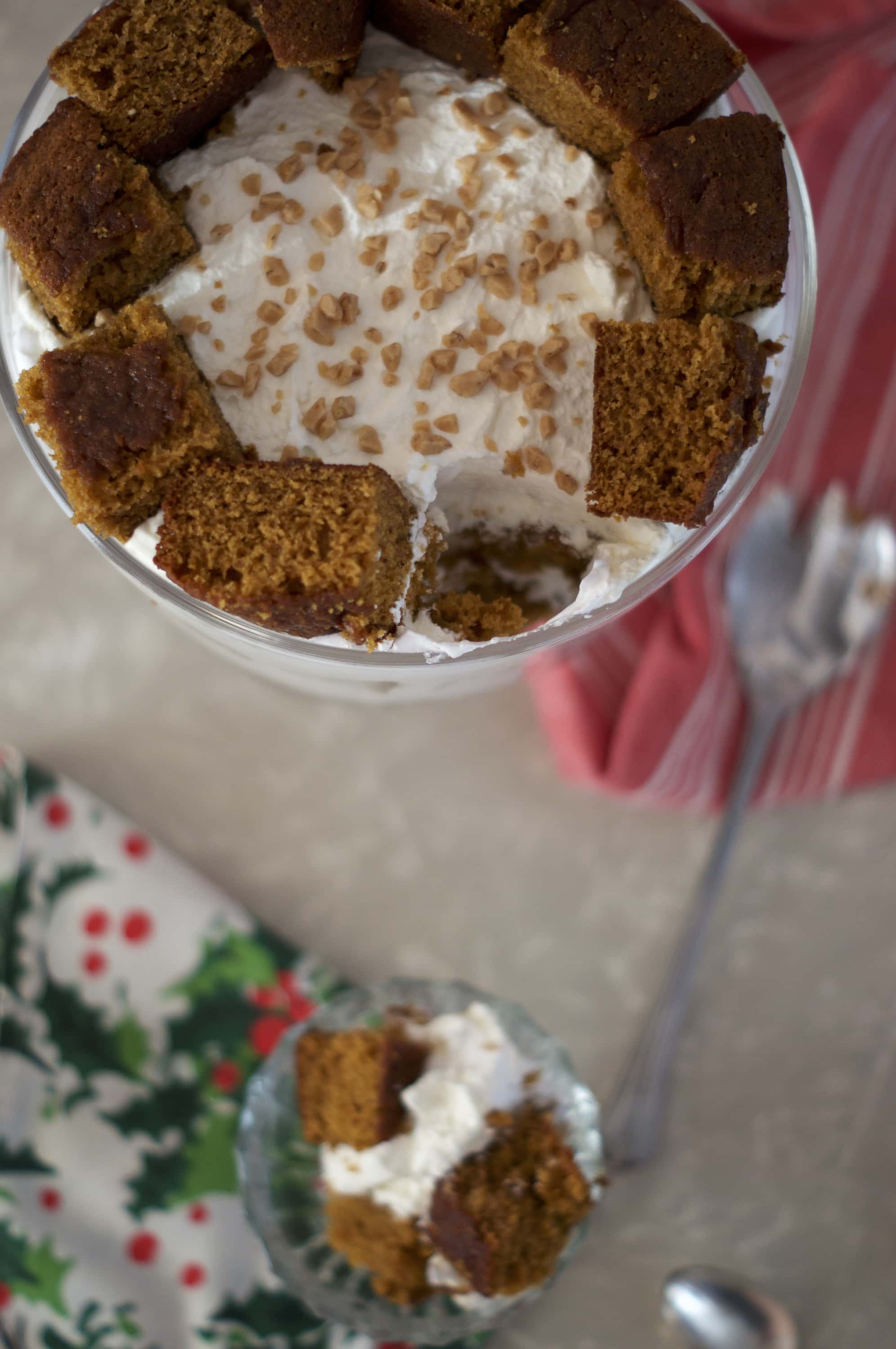 Did anyone else grow up with trifle? So far as I can tell, it seems like a heartily Midwestern thing. And even then, in my experience, it’s specific to my family, my grandmother. Obviously, since stores sell things like trifle bowls, there’s more people that make them than my grandma, but how many more? (Doing a quick Google search just now revealed that trifle is actually English in origin. Huh. Never knew. Wonders of the internet! (And I’m too lazy to go back and rephrase that paragraph, so let’s keep moving along, shall we?))

Grandma always made hers with brownies, chocolate pudding, vanilla pudding, sliced bananas, and toffee bits. This one is a bit more seasonally specific with fresh gingerbread cake, marshmallow cream, and maple whipped cream. I kept the toffee bits though, as a nod to my grandma. 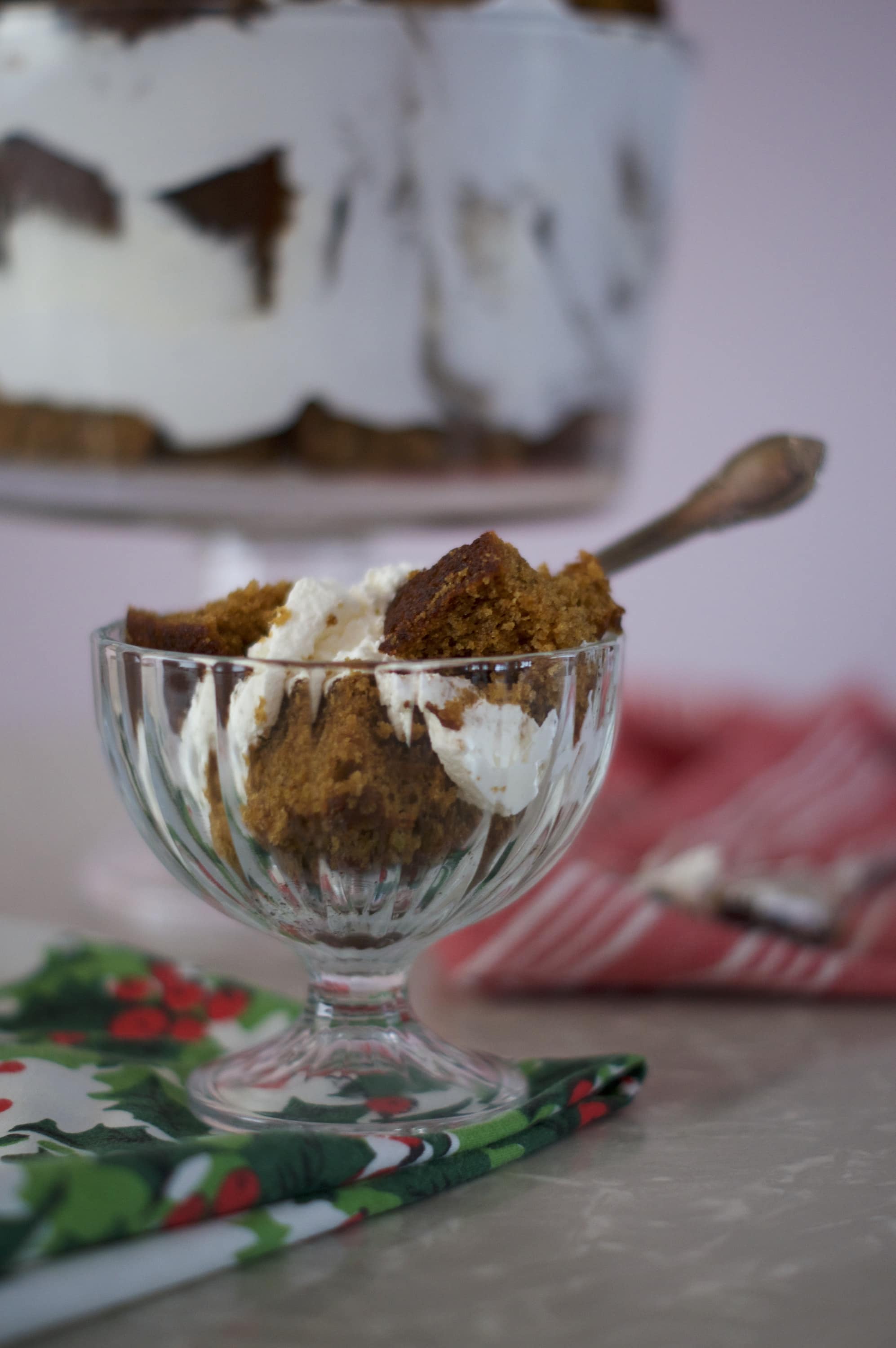 I was actually really happy with how the gingerbread cake turned out. Aside from being structurally unsound, it was damn near perfect. The body of the cake was too delicate to stand up to frosting and layering, so I had no choice but to cute the cake into cubes and make do.

Cake croutons. Get into it! 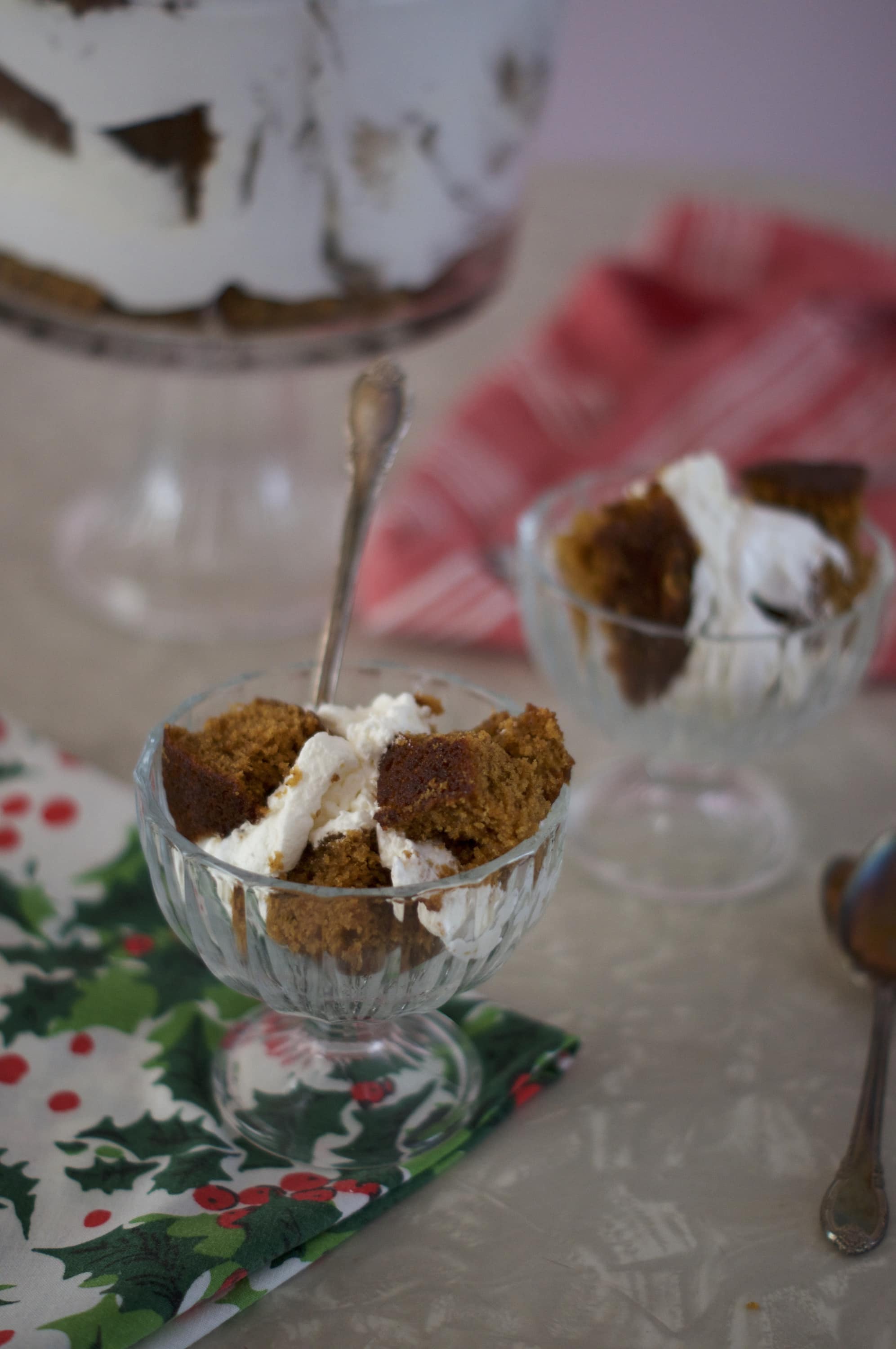 The ginger flavor is so-on point for the holidays. Spicy, but not too spicy. A hearty dose of molasses keeps the cake moist while adding more depth and warmth. I’m going back to the drawing board to figure out how to serve this as a legit cake to y’all. Until then, let’s make trifle!

Marshmallow cream (from a jar of Fluff or homemade)

Preheat oven to 350 degrees. Butter and flour 3 9-inch round cake pans, set aside.

Sift together the flour, baking powder, soda, salt, and spices. Set aside.

In the bowl of a stand mixer, beat the butter and sugar until light and fluffy, about 3 minutes. Scrape down sides. Beat in eggs, one at a time, until fully incorporated, scraping down sides as necessary. Stir in vanilla, molasses and sour cream.

Evenly distribute batter over prepared pans and bake in preheated oven for 25 – 30 minutes. Remove to rack and allow to cool to room temperature. Cut into bite-sized cubes once cooled.

While the cake is baking and cooling, make the whipped cream and marshmallow cream (or buy a jar of Fluff, I’m not judging). I simply follow the recipe on my jar of merengue powder.

In the bowl of a stand mixer whisk the ingredients until light and fluffy and, you know, whipped creamy.

Assembling the trifle: Layer pieces of cake on the bottom of the bowl, followed by a layer of marshmallow cream, then maple whipped cream and a sprinkling of toffee bits. Repeat going up the entire dish (I got two full layer, but if you squish you could get three). Garnish the top with extra cake cubes and more toffee bits. Chill until ready to serve. 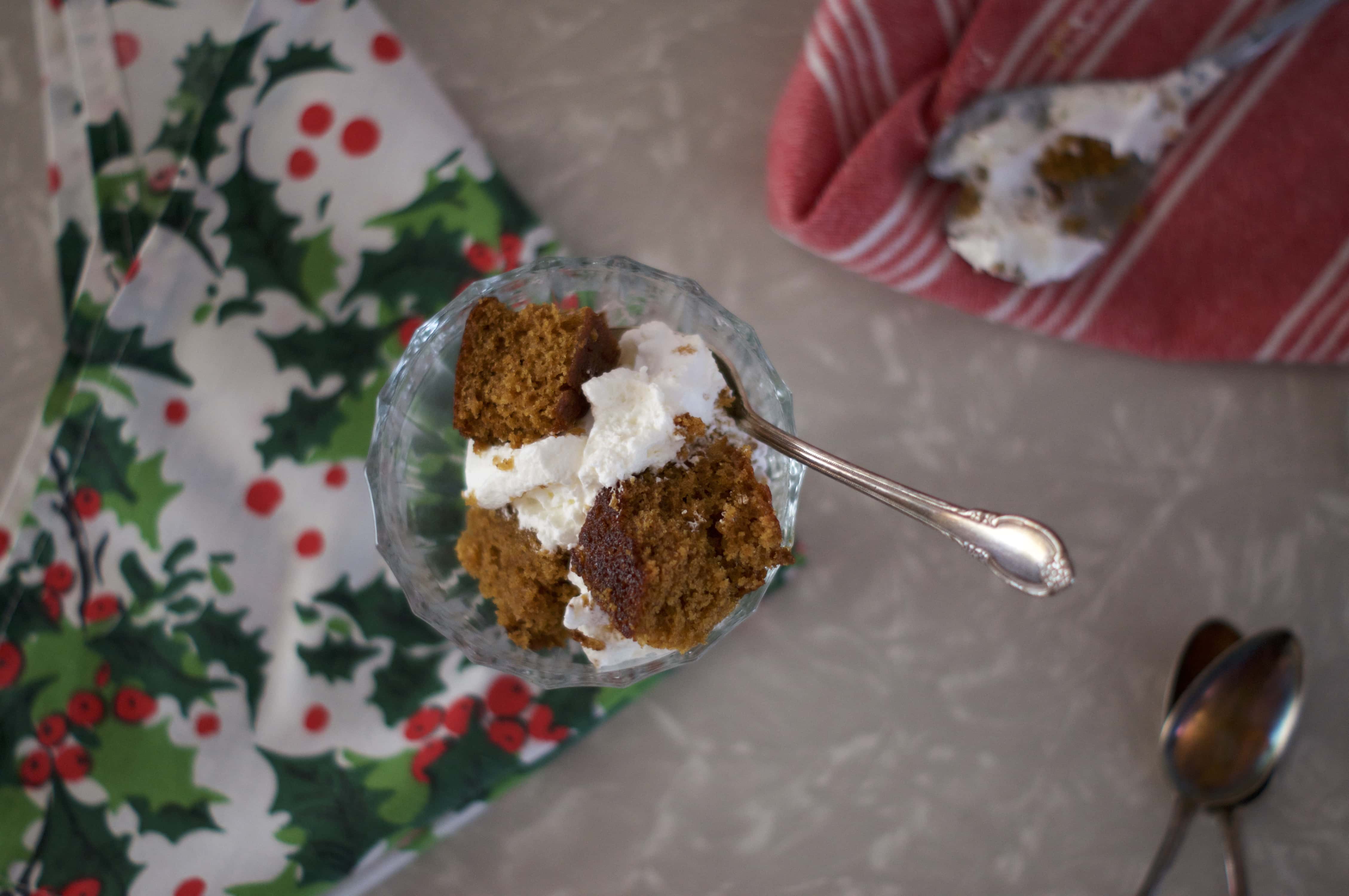